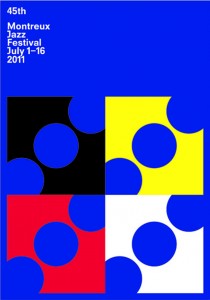 The Montreux Jazz Festival has been attracting music afficionados to Switzerland and the Lake Geneva shoreline annually since 1967. The idiom of jazz contains a wide variety of styles, shapes, textures, patterns and approaches. Capturing the essence of jazz in a poster – a relatively small piece of visual real estate – could at once seem daunting or intuitive ripe. The legion of artists and designers who’ve contributed their substantial talents to this event and particularly this graphic medium have gone to great means to embrace the excitement and underlying dynamic of the event.

For the event’s 2011 festival, Francis Baudevin decided to take a very unique approach and to breach what amounted to a then-tradition of richly evocative imagery. His initial attempts were rejected, but then Baudevin researched the festival’s archive and discovered a poster designed by famed Swiss designer Max Bill for 1991, the only previous abstract expression of the event.

That poster became his portal into a deeper investigation. According to Baudevin’s interview with Reuters, “he (then) found inspiration in the rhythmic repetition of music and the abstract musical notation of experimental U.S. musician and composer Anthony Braxton.”

The connection between visual and musical art forms is intertwined to the core through movement, rhythm, color and pattern. Baudevin’s poster captures in the barest abstract geometric terms, both bright and dark moments, major and minor contrasts, movement and counter-movement, open “negative” space, a dominant pulse, a subordinate pulse and in the broader view, an underlying modal pattern – a living and breathable structure. (Check out the design definitions and video On Rhythm on this site.)

It’s primarily the latter event that spikes the interest since modal patterns remain one of the most powerful legacies of jazz and in particular of Miles Davis. Now’s the time to give a second listen (or joyous first listen) to Miles Davis’ seminal album, Kind of Blue and in particular the tunes, So What and All Blue – while viewing Francis Baudevin’s poster of course!